A boy of 3 years buys a car on eBay 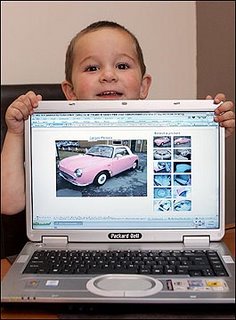 A LAD of three went on his parents’ computer — and bought a £9,000 car on eBay.
Cheeky Jack Neal made a successful bid for the Barbie pink Nissan Figaro.
The first mum Rachel and dad John knew was when they got a message from the internet auction site to congratulate them.
Rachel, 36, said: “We couldn’t understand. So we checked and saw it was a Barbie pink car which we’d bought for £8,999.99.”
By then Jack was asleep. But he woke next morning and told his parents: “I’ve bought a car.”
Rachel, of Sleaford, Lincs, believes she left her eBay password in her computer.
She said: “Jack’s a real whiz — he’s been able to log on since he was two.
Fitter John, 37, phoned the seller and explained the error.
Rachel said: “He said he would re-advertise.”

Previous post: Intelligent control of calls and music through your watch