Get your own personalized Download day certificate from Firefox for helping them set a Guinness World Record for the most software downloads in a single day from here. 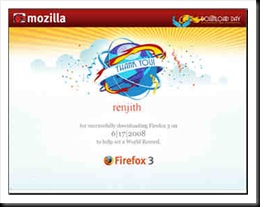 Although Mozilla was on track to set a world record by serving up 5  million downloads of Firefox 3 within 24 hours of the web browser’s release,they ended up

in smashing that over 8 million downloads.Official number of downloads is 8,290,908.

If you have not yet downloaded Firefox 3,then get it now from GetFirefox.com.But make sure Firefox is set to auto update since Tipping Point DVLabs has announced a vulnerability in Mozilla’s latest browser.