How To Add Your Site in Cuil Search Engine

Cuil,a new search engine which claims to be the biggest on the planet came out of its stealth mode this week.One of the main features they claim is the size of its index with 120 billion pages which is three times as many as Google and ten times as many as Microsoft.It’s only now that I realized why Google made an announcement of its index two days before the launch of its competitor Cuil.

It seems that Cuil is trying to improve its index day by day and if they can work the bugs out, it could quickly develop into a supplemental search engine.Also they have provided an option to add your site to their Cuil’s crawl list.

How to add your site to Cuil.

Submit your site URL to Cuil search engine through this form.Include your site name and URL in the message field. 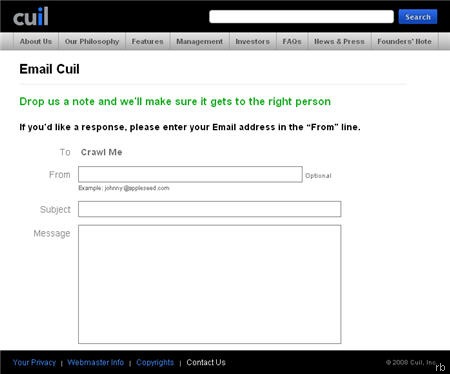 Twiceler is the name of the bot used by Cuil.You can allow Twiceler to crawl your site by writing this code to your robots.txt.Robots.txt file is found in root directory of a website.

I don’t know how much time it will take Cuil to add and crawl your website even though it claims to have a three times larger index than Google.I’ve added my website to Cuil hoping to get some decent traffic from the so called ‘Google Killer’.

Previous post: How To Install Unsigned Applications in UIQ 3 for Free