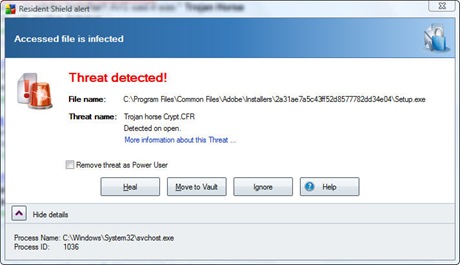 Adobe Trojan infection was reported to be found on systems installed with any of the latest Adobe CS4 trial versions of Photoshop ,Dreamweaver, InDesign and Illustrator.

“I downloaded trial versions of InDesign, Illustrator and Dreamweaver direct from adobe.com last week, installed them, but kept the install files for future reference. Then this evening I get multiple virus warnings, alerting me to the presence of the Crypt.CFR trojan in all the setup.exe files.
There’s no mention of Crypt.CFR anywhere on the internet, as far as I can see, and no mention of false positives with recent Adobe products – just the cracked Photoshop CS4 and the Flash thing from last year. I find it hard to believe that there are new trojans in official CS4 downloads, but it’s strange that no-one else is reporting this. I’m on 8.0.176, with virus pack 270.10.14/1917. Anyone had similar issues? I’m on a brand new computer and haven’t got the hang of Vista yet, so am unable to upload the setup.exe files to jotti or virustotal – keeps telling me I’m not allowed!” –EthylMormon from Avg forums

“The same thing happened to me this morning, AVG said it’s a Trojan from the Adobe Dreamweaver installer, but I don’t think it came from Adobe, I’ve had this on my machine for over a month without a problem. I removed Dreamweaver after putting the Trojan into the virus vault and about 10 mins later it turned up attached to something else. I know Adobe can be very invasive, that’s down to aggressive marketing on their part but I don’t believe an organization of their reputation would knowingly deliver malware. It is strange though that it only being reported today”- Cliff from Yahoo Answers

“I’m pretty sure this is a false positive, and sorry for posting about it here, I don’t know where else do go. The setup of the support forums is confusing me.
Anyway, AVG Free detected a "Trojan horse Crypt.CFR" in Common Files/Adobe/Installer/and a bunch of numbers and letters/Setup.exe . From what I’ve read, there is no such thing as a "Trojan horse Crypt.CFR" and that this is probaby a false positive, but just to be on the safe side, I wonder if anyone else has experienced this and knows what to do.” –Aeolian from Adobe Forums

Update:As expected,it was a false positive from AVG and “trojan warning” of Adobe installer has been removed in the last definition update.