If you want to watch youtube videos on your television, then the only working method i know is to connect laptop/computer to TV using a svideo cable. If you are having a comparatively large TV screen then don’t forget to enable the HD option while watching youtube videos.

How to connect Laptop to Tv using svideo cable

If you don’t have a svideo cable, then buy it from your nearby electronics dealer for approx $3 or $4. Make sure to count the number of pins in laptop’s svideo port. It could be 4 or 7, buy according to that. [for sony vaio models, you can go for the 4 pin svideo cable]

Connect the "S-Video to RCA" cable to the "S-video out" of the computer and to the "video in" (yellow RCA jack) on the TV. This step must be performed before you start up the computer. 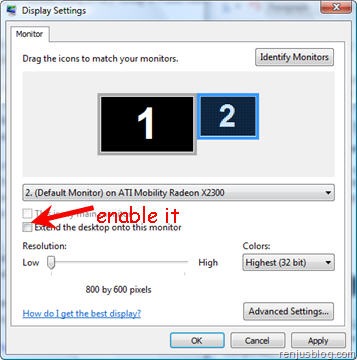 In the computer, take the display settings from control panel. Select the second screen and enable the option ”Extend the desktop onto this monitor” and change the resolution accordingly.

Combination Keys for auto switching to other monitor

You can also enjoy watching the movies stored in your laptop on the big screen TV by connecting laptop to tv by svideo cable.