The new Office mobile 2010 beta has included a lot of features such as more friendly interface specially for touch screen phones.They have also added a multitouch zooming facility. Also connect to work from anywhere with Sharepoint workspace mobile. 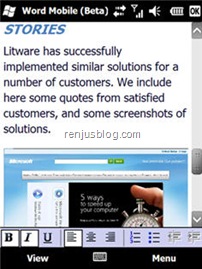 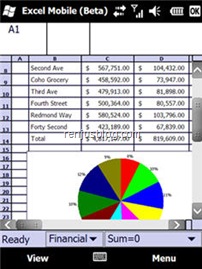 Edit your MS office documents inside your mobile phone with better control and added features. Now it feels more like editing from a PC.

Connect to your work with Sharepoint Workspace mobile.

Use Powerpoint mobile for presentation aid.

AS this version of ms office mobile id still in beta tag, you can download and install it on your windows mobile phone for free.Also it uninstalls any previous versions of Microsoft Office Mobile that were installed after the phone was purchased. But it doesn’t affect your previous installations of Microsoft office if it came inbuilt in your phone.

For installing it in your phone, follow the steps below.

Download Microsoft Office Mobile 2010 from the link given below at the end of the post  or on your phone go to Marketplace application and search for Office mobile 2010 beta and download it from there.

Transfer it your mobile phone if downloaded from computer and install the application.