Symantec has recently released the latest and final version of Norton Ghost 15.0, a backup and recovery software, which is now compatible with Windows 7 and provides support for blueray discs. Norton Ghost 15 includes advanced capabilities and backup/restore options for personal computers.Checkout our review and download Norton Ghost 15 free from the links provided.

With Norton Ghost, you can create an exact copy of hard drives and also transfer them to other external hard drives with ease. With the hot backup feature, the users doesn’t even need to shut down their computer while backing up.

Another great feature of Symantec Norton Ghost 15 is Cold Imaging technology, by which you could backup a ‘fresh pc’ without even installing the norton ghost product. This feature is very much helpful to restore a newly bought PC to the exactly same factory condition even after many months of usage. This imaging technique in Norton Ghost 15 is by booting the PC to the recovery state from Norton ghost 15.0 boot CD and then starting the backup.

The ability of Norton ghost 15 to create images from the Recovery CD is enough worth to upgrade from previous version Norton ghost 14. Also you can now create customized recovery CD’s. Download Norton Ghost 15 free from the official web site.

In the occurrence of system failure, Norton Ghost could be used to recover lost or damaged files even if the Operating system does not start. It works with most storage devices, both 25G and 50G Blu-ray Discs including external hard disks, networked drives, and record/rewritable CDs and DVDs.

Ability to restore the PC incase of system failures.

Backup according to schedules and events

Incremental and differential backup allows you to Backup only files that have changed.

Support for Bitlocker to enhance security by drive encryption and integrity checking have been included in latest Symantec Norton Ghost. 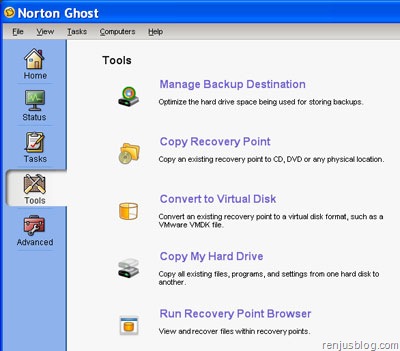