James Cameron’s Avatar created a great buzz in 3D filming technology and depicted a world of high-tech wonder (except for wheelchairs and outdated weapons). As a part of marketing campaign for Avatar movie, McDonalds has come up with a “Avatarize yourself” widget by which you can transform yourself ( avatarize) into a movie character. Generate your own avatar characters resembling Jake and Neytiri by uploading your own personal photos. Checkout and Avatarize yourself !

How to generate your own Avatar /Navi (in pandora)

Go the Avatar Generator [This site doesn’t seem to work now, checkout the alternative widget below.]

UPDATE: March 2010 : Use this widget i’ve embedded below.

Click on “Upload photo”. You can either upload the photo from computer or your facebook album.Before uploading make sure to crop the image so that only your face is revealed. 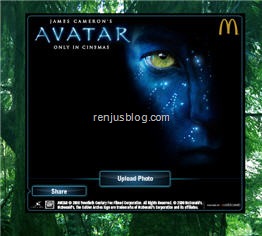 After uploading your pic, you will have to adjust the image (face) so as to resemble the sample photo shown on left side. Just use the rotate and move buttons to align the vertical cross and horizontal cross with your face, similar to the sample photo. In the next step, position the pins accordingly.

After pressing submit, image will be processed(takes some time) and avatar/ na’vi will be generated. You can change the mood (happy/anger) and background of your avatar. 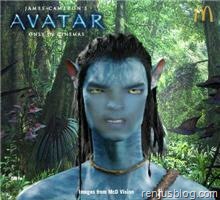