Indian Premier League (IPL) 2010 cricket season commencing from 12th March will be featuring 60 matches spread across 45 days at various places in India. A big surprise in this IPL 2010 season came with Chairman Lalit Modi’s revelation that IPL matches will be telecasted live in 3D! Also you can watch all the matches online live via Youtube for free.

“We are going 3D… and we’ll be the first sporting body in the world to do so,” Lalit Modi, Chariman IPL, told Economic Times.

In this experimental attempt, only the last 4 games will be telecasted as 3D in cinemas,pubs and bars. Another technological advancement in this IPL season will be the introduction of spider cams where the camera actually moves around the ground like a spider web.

After match live telecast of IPL 2010 has been given to entertainment channel “COLORS” which will be telecasting the after match parties and events connected with IPL. 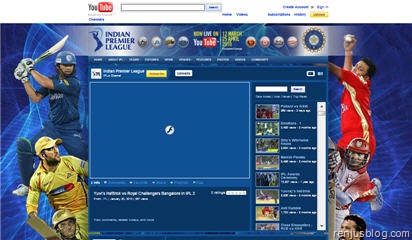 Yes, its true. The Internet giant Google has announced that it would stream all the cricket matches live coming on IPL 2010  via YouTube. Also Google will be having the online rights for showing IPL content for two years under the agreement with India Premier league. This is the first attempt by YouTube to live stream any major sporting event and that too for free.

How to watch IPL3 on mobile

You will be able to get realtime updates and videos of the IPL t20 by calling the MiX toll-free number 08 123 123 123 or by going on to website m.iplt20.com on mobile devices.