Microsoft has pushed a new update to it’s Windows 7 users which detects validation errors and activation exploits. This update known as Windows Activation Technologies (WAT) detects any tampering made to windows 7 system files.

Windows7 activation technologies is capable of detecting whether you’re having an original version of windows 7 by looking over 70 known and potentially dangerous activation and hacking exploits. With this update KB971033, Microsoft intends to notify it’s users whether they’re having a legitimate copy of windows7 or whether they’ve been tricked into buying a counterfeit software.

Even though hackers have easily managed to bypass this activation update, many folks who have been tricked into ‘purchasing’ cheap version Windows 7 from local black market vendors may have fallen prey for it.

So if you’re not sure from where you got your ‘copy’ of Windows 7 download, it’s better advised to stay away this update. 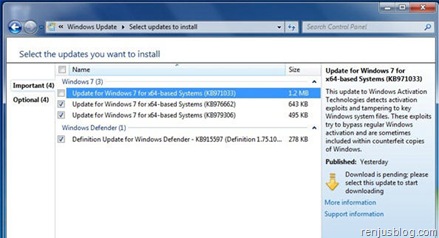 To bypass Windows 7 Activation Technologies Update, just look for an update named KB971033 in your update list. Scroll through each update manually and check the details on right hand side to spot this silent update. If found, just deselect it and continue. You’ve bypassed the ‘pirate’s threat’ from Microsoft successfully.

If you’ve already installed KB971033 update, then it checks and performs a validation process for your copy of windows7.

#Case 1: If no validation errors, activation exploits, or tampered files are detected on your system, then this update silently exits. That means you’re either having a legit copy of Win7 or a full proofed cracked Windows 7.

#Case 2: If it detects any tampered files, which occurs mostly in case of malware infected or custom repacked windows, then the update tries to restore the original file after a reboot. If unsuccessful, you’ll be notified and redirected to more detailed information on the internet.

#Case 3: If the validation update detects any validation errors and activation exploits, then you’ll be redirected to internet for the resolution of this error. And when the exploits and errors are removed, you’ll be asked to activate the Windows copy using genuine license keys. After that, you’ll be periodically notified that you’re copy of Windows7 is not genuine until you format your drive or install a fresh ‘genuine’ or ‘pirated’ copy of win7.

Prevention is way better than cure, so turn off the automatic updates in control panel asap and check each update manually before installing in order to bypass the windows 7 activation update from Microsoft.