Norton antivirus 2011 prevents viruses, spywares and other computer threats without slowing down your entire PC. Also it actively notifies you when other application are slowing your system and impacting PC performance. 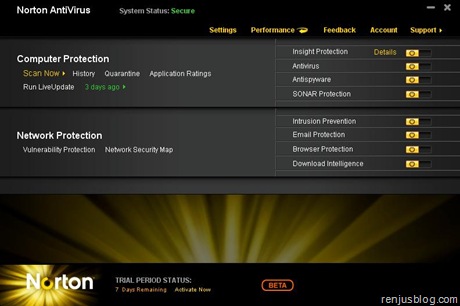 To download 2011 Norton antivirus, go to this official download page and get the beta preactivated version for free. 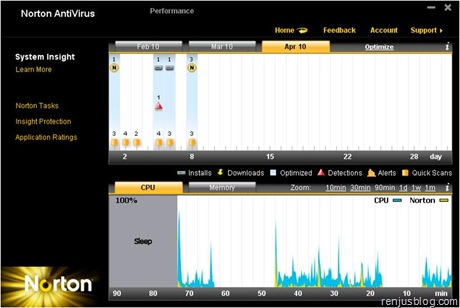 Provides fast scans and uses light system resources so that your PC wont slow down.

Notifies when other softwares are slowing down your PC.

Warns whether the downloaded applications are safe before running them

With this download of NAV 2011, you’ll get a free serial license key of Norton 2011 antivirus which will be valid till a limited amount of time and after that you’ll have to just click Renew to activate the product again for another 14 days. Or you can register in the official site and get a valid license key for Norton 2011 beta version.

Make an account with Norton by following this link

Download Norton 2009 antivirus [yes, you can use the license key of noroton 2009 to activate 2011 versions]

This is actually a Promotional German version. After downloading the setup file, run it, and click on the button which reads “ZUSTIMMEN & INSTALLIEREN”.

Now you have successfully registered and activated Norton 2009 version.

Now logon to your account following this link. After logging in, you’ll be redirected to products page, there you can see Norton Antivirus. Click on it and you can see the product key for norton antivirus. Note it down somewhere in your PC.

Then download Norton 2011 antivirus from this link and use the same key you noted down for activating the product free for 6 months.