The release of Blackberry messenger for Android and iOS got delayed due to some quality issues with the app. The app was released for a short duration but got pulled before the global release schedule. The BBM app which got leaked for iOS can be installed on iphone without jailbreaking. Checkout the rest of the post for the procedure to install leaked BBM on iOS 7.

After the short span release of the BBM app in apple store, blackberry decided to pull it due to some issues with the app. But the users who downloaded the blackberry messnger application during that time has leaked the .IPA file to internet. This IPA file can be used to install BBM app in iOS.

1. Download the Blackberry iOS application (.ipa file) from the link given in the bottom.

3. Open iFunbox application, connect your iphone to your PC. (you should have already installed your itunes, otherwise ifunbox will not detect your phone) 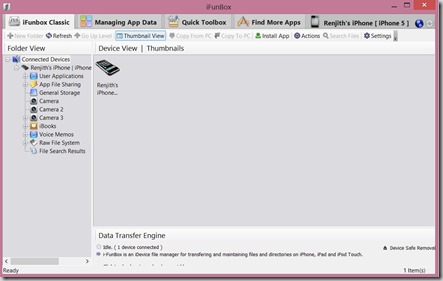 5. Now select the blackberry messenger (BBM) IPA file which you have downloaded from the below links.

6. BBM will be installed and you can create an ID for using in messenger.

We can hope, the official version of BBM for iOS and Android will be released in the near future after the issues have been resolved. As of now you can enjoy bbm in iOS using this trick.